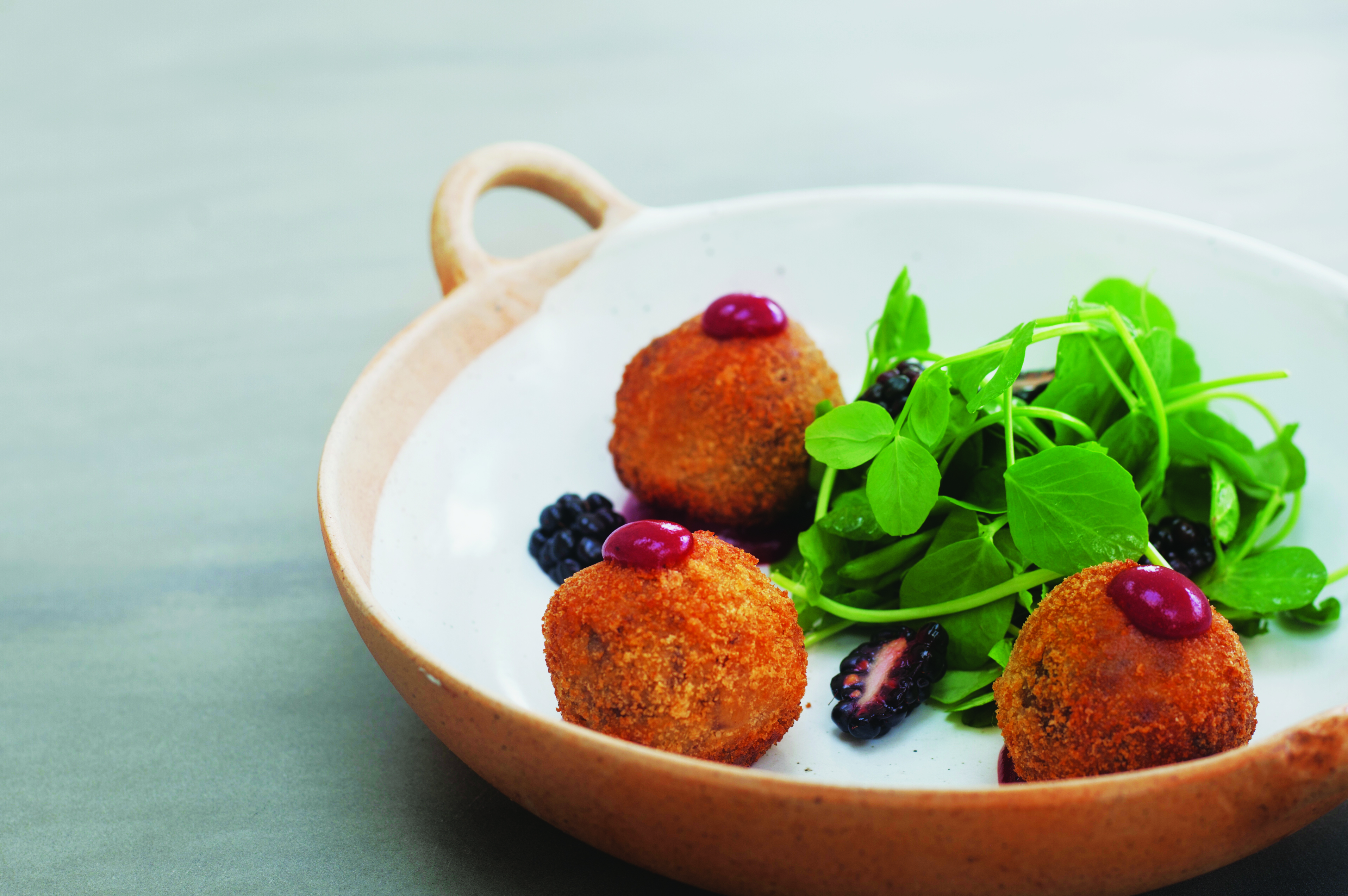 For the spiced plum sauce

For the pickled blackberries

To make the sauce, remove the skin from the red onion, top and tail and chop into a fine dice. Add to the pan with the diced plums. Heat over a medium heat to soften slightly. Grate the ginger into the pan using a microplane, followed by the wine, sugar, star anise and cinnamon stick.

Add enough water to come roughly ¾ of the way up the plum mixture.Cook the mixture down for roughly 20-30 minutes, topping up with more water if needed. Once completely softened and slightly sticky, remove the cinnamon stick and star anise and pour into a blender. Blitz until very smooth and add a small knob of butter. Season to taste and set aside.

For the blackberries, combine the water, vinegar and sugar. Tip the blackberries into a small bowl and pour the pickling liquor over the top. Cover with cling film and store in the fridge until you are ready to plate.

To make the bonbons, place the duck legs into a pressure cooker and cover with water. Lock the lid on the pressure cooker and cook for around 15-20 minutes until the meat falls off the bone. Once the pressure cooker has cooled, remove the legs and set aside to cool. Meanwhile, peel the shallot and dice as finely as possible. Fry on a medium heat until softened and translucent but not coloured and add the five spice, tamarind and plum sauce. Remove from the heat.

Peel the skin from the duck legs and discard, then shred the meat. Pile the meat into the centre of a chopping board and chop through with a large sharp knife so the pieces are very small. In a mixing bowl, combine the duck meat with the shallot mixture and season to taste. Divide into six even portions and roll into smooth balls. Place the balls into the fridge to firm up.

Meanwhile, add the bread to a food processor and blitz to a fine crumb. Tip into a bowl. Crack the two eggs into a separate bowl and whisk slightly. Add the flour to a third bowl and season. In turn, coat each bonbon in flour, followed by beaten egg and then breadcrumbs. Heat a deep fat fryer to 180 °C and fry the bonbons for 3-4 minutes until the outside is crisp and golden.

To plate, spoon three small dots of the plum sauce onto the plate and top with a bonbon on each, topped with another small dot of sauce. Remove 2-3 blackberries from the pickling liquor, half lengthways and dot on the plate. Dress with a small handful of pea shoots and enjoy!

Much loved chart topping headliners Sophie Ellis-Bexter, Scouting For Girls & Toploader will be performing across our summer series.

Watch Celebrity MasterChef Winners cooking live in The Chefs Theatre along with other top local chefs will all be sharing their signature summer recipes and top tips. Try sweet treats and watch Bake Off Winners in The Cake & Desserts Theatre and taste the best wines and champagnes in The Drinks Theatre. Kids learn to cook in The Kids Theatre by SuperChefs. We can’t wait to welcome you back to Foodies Festival this summer for a fun filled day out!