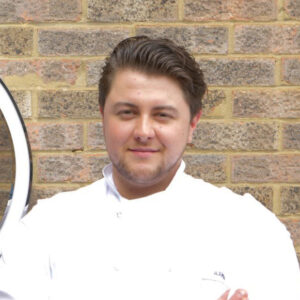 Aaron Middleton is a semi-finalist on MasterChef: The Professionals 2021.

His culinary career began early on, inspired by his Grandmother’s cooking and her love for quality, comfort and great flavour. Whilst finishing secondary school at age 15, Aaron sought opportunities to develop his own creativity, drive and passion.

Aaron’s culinary repertoire was first established during an apprenticeship under Chef Steven Bulmer at Brook hall Cookery school in his home town of Winslow in Buckinghamshire, It was there where Aaron was taken in as a civilian and then moulded into a Punctual, Hard working and Inquisitive Young cook, Many of the Practises He Learnt under the watchful eye of Steven Bulmer Aaron still uses Today. He soaked up the information like a sponge and would not be the chef he has become if it wasn’t for the care and guidance he received in those early years of training. This position put him in good stead for his next big step.

​At age 17 Aaron started working under Chef Raymond Blanc OBE and Gary Jones in the kitchens of the 2 Michelin starred Le Manoir aux quat’ Saison, He spent the following Years cooking his way through all of the various sections and taking the rains on the main pass, he developed and refined his culinary techniques under world class chefs and mentors, learning and understanding the fundamentals of great produce and sublime flavour. He became consumed by the love of great food. “The focus and care it takes to Create something magical is second to none, You have to be a part of what is happening on the stove, it becomes an extension of you.”

Having become an integral part of the senior team at le Manoir Aaron proceeded to London’s once Famed The Ledbury, where he served under Chef Brett Graham. It was there where he extended his skills and solidified his ability to cook and produce sensational food across the all areas of the kitchen, deepening his knowledge and ethos on how food can make you feel and think. “Cooking at The Ledbury takes everything you have, it exposes you completely, there’s nowhere to hide. you learn more about yourself in one service than in years of therapy. I had the best and worst time of my life in that kitchen but I can say this for sure, my time at The Ledbury was the most impactful job I ever had, the love and passion running through the veins of that building are connected the pounding heart of Brett Graham him self and as soon as you set foot in the door you could feel it. to fully give yourself to your craft, food and expriance you provide, that’s what I learnt at The Ledbury and that it what I have taken from it.”

After his time at The Ledbury, Aaron was head hunted by an old friend Luke Selby to take another senior role at Chef Ollie Dabbous’ new project, Hide. As part of the opening team Aaron was heavily exposed to the creative and deeply intelligent expressions of Chef Ollie Dabbous progressive European cooking techniques. As well as seeing the logistics and structure that is required when opening and running a successful restaurant from scratch. Aaron would frequently be entrusted with overseeing the full running of “Hide above”. Hide won a Michelin Star within 5 months of opening. “Hide was the perfect embodiment of elegance. it was there I saw the style of the restaurant  encompassed in every aspect of what was within it. the food, the Uniform, the music, everything looked at, everything thought of, it was Ollie down to the last petit four and to be a part of putting that together is something that grew me immensely.”

In 2019 after 9 years of perfecting his craft Aaron took over the position as Head Chef for Sir Richard Branson at his residence on Necker Island in the British Virgin Islands.

“Necker was the start of a whole new journey for me as nature and story telling really sung through in my food. Food is a blessing and to share your soul with another though food is the ultimate gift of giving”.

With a great tan, a world of knowledge and a lot of fond memories, Aaron returned from paradise seeking a platform to showcase his skills and experience, he is a passionate, young chef with world class training, stars in his eyes and fire in his belly.

Today Chef Aaron Middleton can be found creating ideas and perfecting new concepts at a private household. With opportunity and growth at the forefront of his mind.