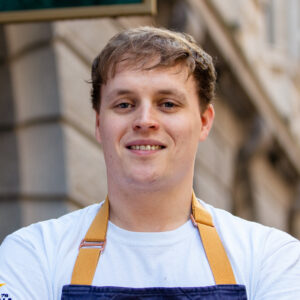 Connor Black was born in Frimley, Surrey, but had his first taste of hospitality as a youngster, as part of his GCSE apprenticeship working two days a week at The Royal Hotel (2AA Rosettes) on the Isle of Wight, where he grew up.

When Connor turned 15 in 2012, he wrote a letter to Tom Kerridge at The Hand and Flowers requesting work experience. Connor did a week in the kitchen at the two-Michelin starred pub in Marlow, and impressed Tom so much that he invited him and his Dad for Sunday lunch and offered Connor a permanent role in the kitchen. Years later, Tom returned the original letter to Connor as a memento.

Connor worked as an apprentice at The Hand and Flowers and quickly progressed to Commis Chef and Demi Chef a year later. In November 2015, Connor moved to Australia working as a Chef De Partie at Gastro Park in Sydney which had two hats (the Michelin-star equivalent) and worked under Grant King. Connor went on to open seafood restaurant Cirrus in Sydney, as Junior Sous Chef, which went on to win Two Hats in the first six months. He then worked at Oscillate Wildly in Sydney’s New Town district, another Two Hat restaurant with a tasting menu only.

In 2017, Connor returned to the UK and worked at Tom Kerridge’s The Coach in Marlow before joining the openings team for Kerridge’s Bar & Grill in 2018 as a Junior Sous Chef under Head Chef Nick Beardshaw.

Connor returned to Marlow in 2019 and took on a joint role as Head Chef of The Shed, the intimate 10-cover private dining room and Sous Chef of The Hand and Flowers.

Now, Connor joins Kerridge’s The Bull & Bear in Manchester’s Stock Exchange Hotel in his first Head Chef role at the age of 25. His incredible experience has given Connor the skillset and confidence to push the restaurant to new levels. Connor’s cooking ethos is aligned with Tom’s to focus on maximising flavour, with minimum fuss where each ingredient stands out.

On his promotion Connor Black says, “I am really excited to lead The Bull & Bear, I first worked for Tom Kerridge ten years ago and I am thrilled to be heading up the kitchen in Manchester, a city that is fast becoming very foodie”.

Tom Kerridge adds, “I remember first meeting Connor, a young lad with big culinary dreams. I am so proud of what he has achieved already, and with a decade of incredible experience behind him, I know his future looks just as bright.”

In 2022, Connor won an Acorn Award celebrating the industry’s most talented stars under 30, with each winner nominated by their peers for their exceptional ability in their field.