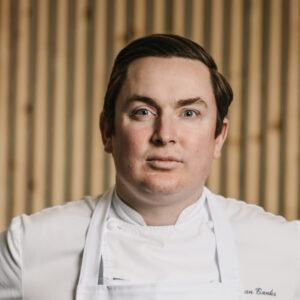 Dean Banks has spent his life being passionate about cooking, starting his career at the young age of 15. This early leap to cooking was encouraged by growing up in a small fishing town called Arbroath, famous for the Arbroath Smokie. This strong local bond set the scene and started him on the journey to becoming the accomplished chef he is today.

Dean’s career has taken him around the world, visiting over 40 countries. During these travels he has witnessed and absorbed many cultures, their styles, specialist skills, techniques and flavours of cooking.

When he was younger, Dean trained in what is regarded as the best seafood restaurant in Britain, Rick Stein’s The Seafood Restaurant. Dean’s thirst for learning brought him back to Scotland to work in many of Scotland’s Michelin-starred restaurants to refine his techniques and skills.

Dean then swapped the ocean for the mountains and based himself in Verbier. Here he found himself working in the best chalets in the world where he created incredible food for high-end clientele. In the breaks between winter seasons Dean travelled the globe in search of different cuisines, culinary experiences and influences.

In 2018 Dean decided to move home to Scotland. This coincided with Dean feeling it to be the right time to enter Masterchef: The Professionals where he wowed judges from the beginning. Using the techniques, creativity and a wide selection of the flavours from his travels, Dean advanced to the final three of the 2018 show.

At this pivotal point in his cooking career, Dean opened his first restaurant, Haar, in St.Andrews in 2019. The restaurant was added to the Michelin Guide within its opening weeks and has since picked up numerous accreditations for its food, sustainability and ambience.

Since the restaurant opened in 2019 Dean has added to his portfolio with the creation of numerous businesses. Firstly Lunun Gin, a craft Scottish gin made in his hometown of Arbroath, which has recently won a number of prestigious awards.

When Dean Banks’ Haar Restaurant temporarily closed its doors in March, it was an uncertain time for everyone. Dean and his team had to think of a solution to protect the future of the business, its staff and their families. Ironically his ‘outside the box’ solution was what was inside the Haar at Home delivery box itself. Haar at Home continues to deliver luxury dining boxes nationwide and this is very much an ongoing project.

Not only that, Dean launched Waagyu, the ultimate high-end premium burger boxes, which have proved outrageously popular. With BIG plans for clever twists on the idea, there’s a lot more to come from Waagyu.

And then of course there is his latest project Shaaken – think premium cocktails delivered direct to your door. As always with Dean, everything is perfectly done, with the utmost attention to detail.

In late 2020, Dean and co. opened Haarbour Fish and Chips in St Andrews. Fish and chips but not as we know them, this is the Dean Banks version – so think premium, top quality food served in that innately stylish Dean way.

Now Dean and his team are bringing a new fine dining restaurant to the capital. Dean Banks at The Pompadour will open in June 2021.

And the sensory journey that awaits you in this iconic room is unlike anything you have ever experienced. That’s what dinner with Dean Banks is… unique.