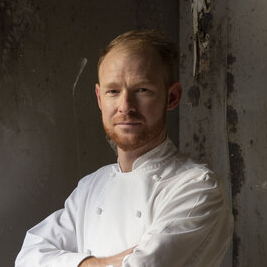 Unalome, a Buddhist symbol representing the path to enlightenment along with the twists and turns of life along the way perfectly encapsulates Graeme’s journey and love affair with cooking, a voyage that has taken him from his hometown of Glasgow, venturing overseas to Singapore and the bright lights of New York, before returning to Scottish shores, working up to Head Chef position with Martin Wishart at Loch Lomond. After successfully retaining a Michelin star at the restaurant for five years, Graeme took on Head Chef responsibilities at the five-star, luxury Isle of Eriska Hotel in 2018 and after only a short spell, was again awarded a star in the Michelin Guide in 2020. Graeme’s journey to culinary peace and enlightenment has now led him to Unalome, his first solo venture back in his native Glasgow with the aim of a third Michelin star by year end.

Graeme classes his food as modern European and is often inspired by Japanese culture and cooking.

Graeme and his team work with some of the best Scottish suppliers from all over the country and further afield to give the diner the best possible produce.

After discovering his passion for food whilst at school, Graeme has had a successful career working for numerous high-profile chefs and kitchens across Scotland. He secured his first role working for Geoffrey Smeddle at fine dining restaurant Étain.

Graeme then spent time overseas, learning from international chefs and developing his craft further. He has travelled to Singapore for various stages in Michelin standard restaurants and to New York, where he has staged with renowned chef Paul Liebrandt and with three-star Michelin restaurants Per Se and Eleven Madison Park.

Graeme was offered a commis position at the age of 21 after doing stages with Michelin star chef Martin Wishart’s Loch Lomond restaurant. He rose up through the ranks and was made Head Chef in under two years of starting at the restaurant. A year later the young chef was able to retain the highly coveted Michelin star awarded under the leadership of former Head Chef Stewart Boyles and held it for five consecutive years.

Graeme took the position of Head Chef at The Isle of Eriska Hotel in Summer 2018 and was awarded a star in late 2019 for the Michelin Guide 2020. Following the Covid-19 pandemic, Graeme took the leap and started his own venture, Unalome by Graeme Cheevers in Glasgow’s Finnieston area.

He is a multi award-winning chef, has participated in live cookery demos at Scotland’s Foodies Festival and is regularly profiled in the media with his dishes and recipes.