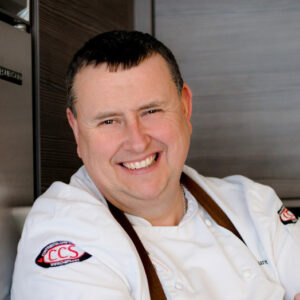 Richard, a Devonian born and bred, has a passion for local produce and utilising the best of Britain’s seasonal ingredients and can often be seen showcasing the best of the UK’s produce at local and national food festivals throughout the year.

Utilising the very best UK ingredients in season is Ricard’s passion, along with an emphasis on sustainability and provenance.

He has managed a variety of high quality culinary operations throughout the UK, from exclusive private clubs to central London hotels, and overseas operations, most recently as Executive Chef of the prestigious Wentworth Club in Surrey,  He is a Master Craftsman and Committee member of the Craft Guild of Chefs as well as being a full member of the Institute of Hospitality and a member of The Royal Academy Culinary Arts.

Richard has competed at all levels of competition from winning Young Chef of the South West to being a culinary judge for nearly 25 years culminating in judging the National chef of the Year, as well as the inter-military competitions

Richard has appeared on various national TV programmes including regular slots on BBC Radio, including 5 series of Kirstie’s homemade series, Iron Chef UK, Monster Munchies, as well as the Edwardian and Victorian Farm for the BBC.

His connection with the local colleges, having both trained at South Devon College and Exeter, as well as completing a BSc. In culinary arts at The University of West London. The training and retention of the next generation of chefs is something that Richard takes great pride in and he views this as a way of safeguarding the skills of hospitality for the future.

A keen but inconsistent Sea Angler and cricketer and occasionally golfer with interesting career decisions for example to build a giant Cream Tea at The Devon County Show which was 8ft across and weighed over a tonne, which has secured infamy in the great cream tea debate between Devon and Cornwall (Cream first always 😉